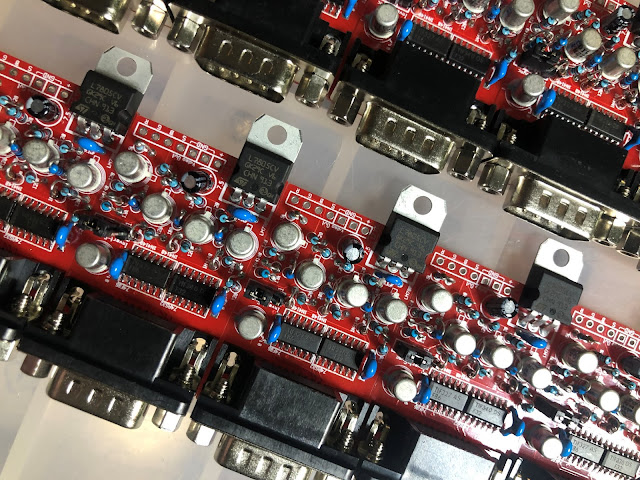 We have taken the opportunity to restock the RGBI to RGBA Adapter for the 8200 series JAMMA boards. We have changed from 1/4 watt to 1/8 Watt resistors which make the build a lot nicer and the profile smaller. 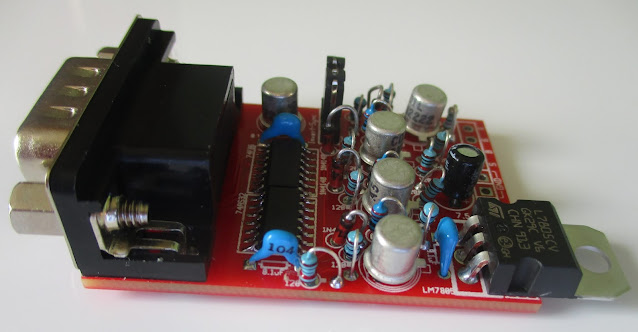 Here is the info on the board -

"...I've been working on an adapter to connect a C128's 80 column video port directly to a video-game-to-VGA upscaler board such as the GBS-8200 or 8220 (i.e. ones sometimes called "JAMMA" boards). The C128 produces digital RGBIHV output pretty much identical to the old CGA video standard, while some of those upscaler devices require analog RGB signals (without a separate intensity signal), and composite H+V sync. This board seeks to address this mismatch.

My intent here is to reasonably duplicate the standard C128/CGA palette as described in the article on Wikipedia, including a suitable "brown fix" circuit.

At one end is the C128 video port connection. At the other end is a row of five holes to receive the wires from the scaler board's video-input pigtail, and two more holes next to them for power input. If you are using this adapter with a GBS-8200/8220, you can use its barrel connector to power it at 7.5 to 12VDC, and then use its two-wire power pigtail to send power from there to the RGBI-to-RGBA adapter.

The "Invert-Sync" jumper, located half-way back at one edge, is provided here to address an oddity with how the C128 interacts with the GBS-8200. If you need to use the GBS's "auto scan" button, you may first have to move the jumper to the "Invert" position, then press "auto", wait for the GBS to finish syncing, then move it back to the "Normal" setting. When the GBS finishes, you'll see a stable, but slightly jittery screen until you move the jumper back (at least, that's how my 8220 behaves)..."

Popular posts from this blog

April 08, 2020
The Cableless SD2IEC Interface. This is part of the family of products from Urko Manufactured in Spain - SD2IEC, Cableless SD2IEC, Tapuino & Tapuino Mini. Now supplied with the atmega1284p as standard, this allows you to use custom firmware running many more games. Available from stock, £48 plus postage, email sales@sharewareplus.com
2 comments
Read more

Updated - Pi1541 HAT with OLED display for the Raspberry Pi 3+

March 27, 2020
Now updated. The Pi1541 is a real-time, cycle exact, Commodore 1541 disk drive emulator that can run on the Raspberry Pi 3B, 3B+ and 3A+. Simply put your games, demos and programs in .d64 format onto a microSD card or USB flash drive and load it from the Pi1541 like a real Commodore 1541/1581 disk drive. This board uses 'Option B' which means that you need the line 'splitIECLines = 1' in your options.txt file. Pi1541 Features - 128x64 OLED display included Dual DIN connectors (serial ports) Power and activity LEDs Socketed 7406 IC Piezo speaker for stepper motor sound simulation (optional) Output for external speaker All you need is - Raspberry Pi 3B/3B+/3A+ with a micro-SD card 2.4A Power supply Serial Cable You can read more about the Pi1541 - https://cbm-pi1541.firebaseapp.com The origin of the PCB Layout is www.hackup.net This is now available in retail packaging assembled £26, as a kit £22 and PCB Only £3. If you have any questions or
Post a comment
Read more